Become Tipper and order this Bookmark!
Available until Midnight, Tonight.

Tonight we “finish” that tiring month which introduced multiple new things like our redbubble and storenvy shops who are totally operational now. This month we also finished our tipeee’s delays, and we’re really happy to be up to date. :3

We also slowly start to prepare our steam programs for twitch and our youtube replays of those streams. On the agenda: weekly illustrations linearts, some steps of our monthly illustrations also, colouring of some Ré-Incarnat° already released pages (those that are in white and black on the website) and also some video games, because why not share another of our passion with reasonable limits. 😛

We work slowly on our stream overlay, and on some sympathetic animations also for the stream. Other than that, we will soon start working on our August rewards for Tippers, which will have a new effect that we never tried yet! / o /

Lastly we’re also gonna work on the last shop we had in mind: a displate one. Which will be an alternative to redbbule for metal prints, even if I think on displate only “portrait” illustrations will be orderable.

Outside of this big program, we also work on the return of a more stable content, since between the already made preparations and the caught up delays, some of our time will be freed to let us create more again! So we’re going to work first on the part 2 of Ré-Incarnat°’s chapter 3, with even more details than before, since we think it still wasn’t detailed enough. ^^

We will then see to start back some little strips here and there, and we also have another idea for another short stories comic. :3

PS (for tippers): september’s step by step and timelapses will be uploaded in the next days don’t worry. ^^ And we will even add the intro of our twitch as a video this time! Timelapses will also get some upgrades for October, we will tell you more in the timelapses article itself. 😉

On that note, good night everyone! 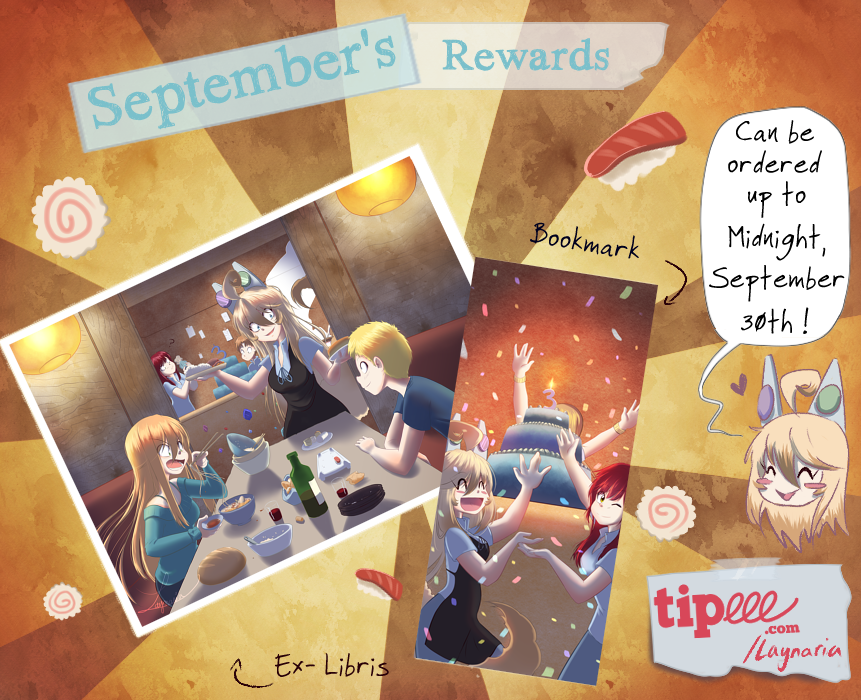