Become Tipper and order this Bookmark!
Available until Midnight, August 31.

We’re at the end of the month, so it was time to share our monthly bookmark! (Which was already ready yesterday in fact)

We started working hard on our two shops preparations. (There will maybe be a third shop, but we’re not yet 100% sure about it)

– First shop will be used to buy old stocks from our Tipeee prints (Bookmarks and Monthly Prints).
So we will remove the option to order old rewards from our Tipeee page, and it’s better like that, because it was really not convenient. Instead we will add some promotional codes for our different shops.
Of course, being Tipper every month will still give the prints of the month, and that will remain as important as right now.

– Second shop will contain goodies, clothes, metal print painting and some other decorative objects. For those ones, we will make new visuals especially for them. But we’ll also use designs from our illustrations! For most of them, it will be the weekly ones that will be used, since a long time some readers wanted to be able to buy them in any kind of way, so now it will be possible! :3 We’ll also use some of our monthly illustrations, that we think are particularly adapted to some objects.

At the same time, Aria works on Tipeee’s rewards delays. We hope to be able to finish those before the opening of first shop.
Second shop will most likely open first because of that, we will see!

In the next weeks, we’ll also do our first twitch tests for streaming some things like:
– Colouring of Ré-Incarnat°’s already released pages.
– Creation of Tipeee’s watercolours and drafts.
– Maybe creation of some goodies/clothing visuals for our second shop.
– Maybe also drawing of new emotes for our discord. ^^

Quite a program, right?! We also want to release some more pages of Ré-Incarnat° in end of September, maybe less than we thought with all the preparations that we have to do for the shops etc… But once it’s done, that won’t affect anymore the progress of Ré-Inc. :3

We wish you a good end of week everyone! 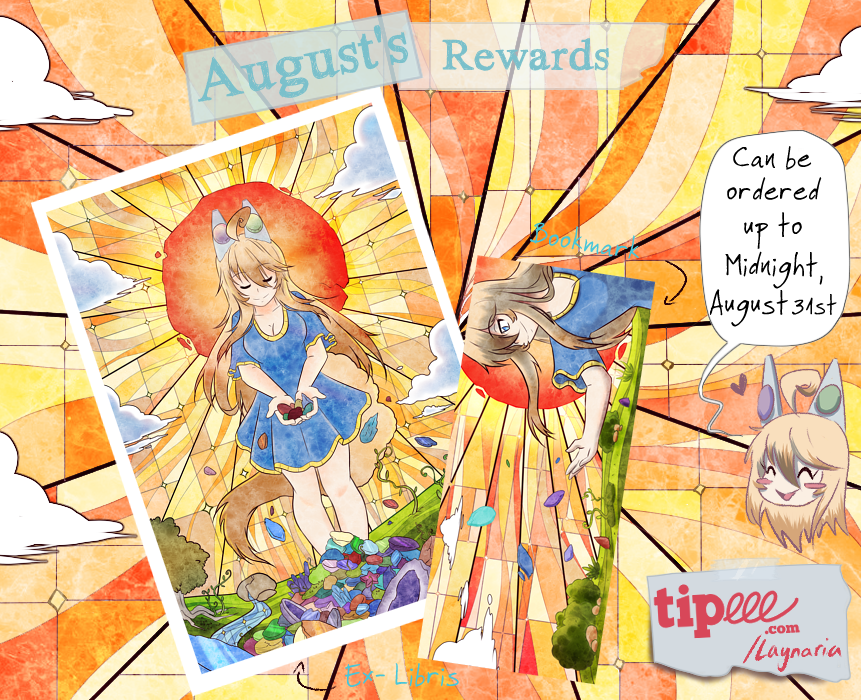