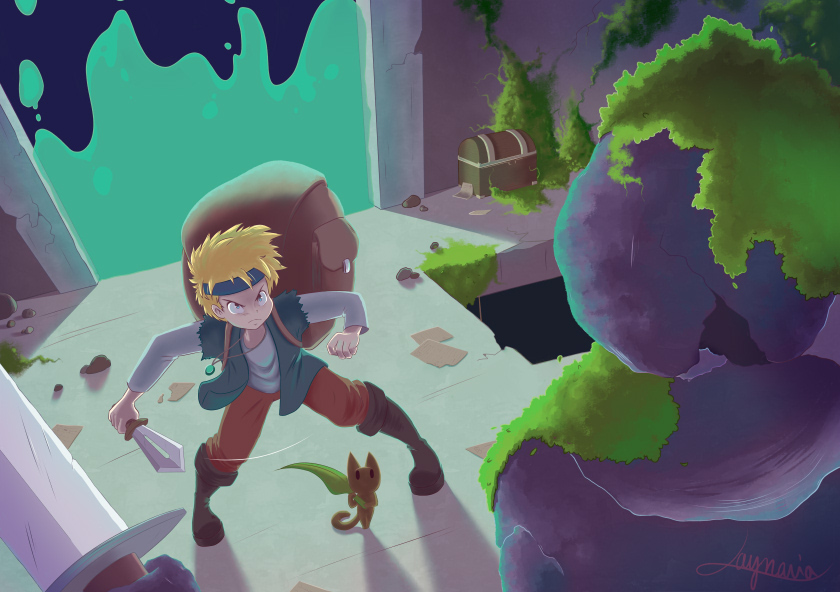 Aria: With this really hectic month that is coming, I didn’t have any other choice than making the monthly illustration as fast as possible, knowing that for two weeks around we won’t be able to work, or at least not in good conditions…

And since Layne geeked a lot Moonlighter the last weeks, we decided to put it in the spotlight! \o/ I hope to have portrayed well this beautiful universe. :3 (bookmark will soon be released by the way :3)

Layne: What can I say after Aria nearly telling everything? Well, first Moonlighter is a really nice game, I can’t wait to play its dlc, but for now I’ll most likely do a “new game + “ like in a lot of games. 😛 As always, we had a lot of fun to think about multiple points of the illustration, and we hope to have succeed on the “dynamic side” we wanted to do to honour this superb game. :3

We also think about doing a metal effect for this beautiful illustration, but we’re not totally sure yet. :3

As always, this month’s Ex-Libris can be ordered as printed version on Tipeee‘s page until Midnight, August 31! It will come with its sidekick : the bookmark, which will be revealed before the end of the month! :3 (The whole is naturally printed on quality paper ;P)